I’ve been wrestling with a very large t-shirt quilt for several weeks now but I’m finally just about finished and ready to move on to other projects.  Christmas is only weeks away and I was asked to make a nurse/doctor bag for my niece by my mom.  Apparently one of my nieces asked for a Pogo stick for Christmas so my mom thought her sister should have a medical kit handy.  My mom is a nurse so she was able to find the tools necessary to make a well stocked nurse/doctor bag.  She just needed a bag.

I found a pattern for a rounded purse which I thought looked like the old time-y doctors bags and Joann’s had their patterns on sale for $1.99 so that’s where I started.

I haven’t followed a sewing pattern in a while so it was rough.  Plus I really don’t like to follow those directions because I always seem to have a slight modification that I want to make and then things don’t go well.  With this pattern, I wanted to change the handle.  I couldn’t find just the right leather type handle that I wanted so I had to use a set of wooden handles.  A little weird I know, but I was trying to take some shortcuts. 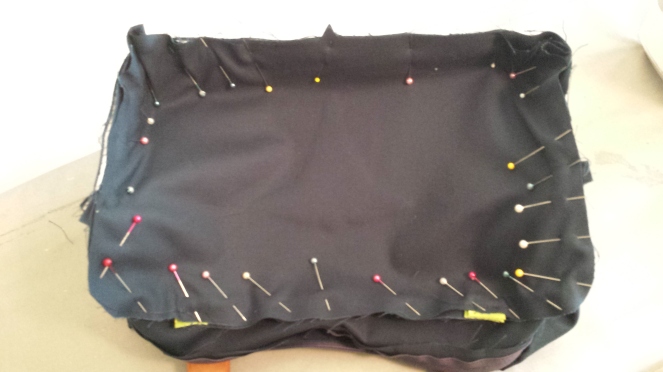 There was some pinning and stabbing.  I’m not gonna lie, I wanted to quit after the first side.  I re-pinned this thing about 4 times because I couldn’t get it just right.  But I kept at it and got the sides on.  Then the lining had to be added.

I actually had to sew it in by hand so that it would attach to the zipper.

And the finished bag.  It’s not the prettiest thing in the world but I think it will do.

Mom wanted a caduceus (I learned a new word there) on the side so I found one on the internet and tried out those iron-on transfer sheets.  Since the bag was dark colored, I had to get the ones made especially for transferring onto dark colored fabrics as most are made to use on white or light colored t-shirts.  I learned all kinds of new things with this project.  Who knows; maybe my niece will learn all kinds of new things with her medical kit and decide to become a nurse someday.  Mom would definitely love that.

I’m in the process of moving my sewing stuff into what used to be our spare bedroom/son’s room.  He moved his stuff out and I took my time cleaning & repainting the trim.  The room isn’t huge so I want to make the space as practical as I can.  The bad thing about moving from the basement is that now I don’t have space to lay the pieces on the floor and move things around.  I need to expand my design wall and use that space instead so everything is still a work in progress.

I keep walking past the room wishing I had some time to sew in my new space but things are busy this time of year.  I miss my sewing time.  I did have a few minutes to plan out the Flags of the World quilt and was running into some problems because I had originally planned to put white sashing around the blocks.  It just didn’t look right because a lot of flags are white or have white edges.  I couldn’t tell where the flags started and the sashing ended.

I found a flag quilt online where the maker made the flags the size of a standard sheet of computer paper which is 8 1/2 inches by 11 inches.  I think this is a brilliant idea because the flags will end up rectangle and I can always draw out & paper piece the more intricate flags – like the British flag.  The finished blocks will be 8 x 10 1/2 inches.  I like the idea of not adding sashing; to just put the flags together side by side.  If I do 5 flags wide by 7 flags long, the quilt would be 52 x 56 inches without borders.

I was able to test out a couple flags after school today and I really like this size:

Maybe I can use the old blocks on the back somehow if I ever get time to finish it!